Have you ever walked in on someone doing what they were not supposed to? Maybe it was a child or a friend. Or maybe that someone was you and someone caught you in the act! For me, I remember a time when I was in second grade and my friends and I decided that we were going to say some bad words on the playground for fun. The problem with this was we weren't aware of who was listening in on our conversations. I still remember the look that Mrs. Robinson gave me as we got back into the classroom. I thought to myself, Please don't tell my parents (I was a pastor's kid).

In the passage from Mark, there is a lot of symbolism here that we must not miss. This is a passage that I think we skip over some and concentrate on this vision of Jesus who loses his temper in the temple and begins flipping over tables. There is a reason that this story of Jesus in the temple is bookended by the fig tree, and for this devotional, this is where I would like to concentrate. What is going on here? I mean, this seems to be a weird story, doesn't it? Jesus is going for a walk with his friends, gets hungry, and goes up to a tree that is not in season yet. When he doesn't find any fruit, he says "May no one ever eat fruit from you again" (v. 14) and later, we see that the "fig tree withered from the roots" (v. 20). There is a powerful image here that we must pair with Jesus cleansing the temple.

For ancient Israel, the fig tree was a rather important symbol. The land that God gave to the Israelites was obviously plentiful, flowing with milk and honey. It was a blessed land that produced delicious fruit, one of which was the fig. I honestly don't know if I have ever eaten a fig, but this fruit tree became a symbol of the nation of Israel, representing national pride and prosperity. Think of a bald eagle for America- that is what the fig tree was to Israel. What is interesting is that the fig tree had lots of leaves, but was not bearing any fruit. Since it did not bear fruit, Jesus curses the fig tree, which turns out to be the only destructive miracle that Jesus performed in his life. Mark wants us to see Jesus cleansing the temple in the context of the fig tree.

I believe that a large part of what is going on here is Jesus catching Israel bearing no fruit. They have been caught in the act by God himself. Jesus shows up in the temple and sees that they are all show (lots of leaves), but they are not actually producing fruit as God intended. I want us to pay attention this week to how often the texts for Holy Week bring us back to the beginning- the garden. After Adam and Eve sinned and realized they were naked, what did they do? They "sewed fig leaves together and made coverings for themselves" (Gen. 3:7, emphasis mine). I mean...c'mon, right? This tree, covered in leaves, was bearing no fruit. In the same way, the people of God were caught covering themselves with religious activity but not displaying true devotion to God. They thought that they were chosen by God to worship him in the temple, when actually they were chosen to be in communion with the Creator of the world and to be a "kingdom of priests," making the temple a "house of prayer for all nations," not "a house of prayer for the Israelites."

Jesus brings us back to the garden, cursing the fig tree and cleansing the temple, to say that we need to push the restart button on this whole thing. They were caught by Jesus in their pride and superiority, excluding people from temple worship. Their own religiosity made it as difficult as possible for others to come to God. So, Jesus says, listen, this is what is going on here- there is no faith! If you would stop making it about yourselves and make it about me, you have no idea what kind of mountains you could move. Love God, love others.

I wonder about us. Do we need to return to the garden and start over? Has our own religious devotion become a stumbling block for unbelievers to come to Christ? Do we want to be found by Jesus to be covered in leaves but bearing no fruit?

Popular posts from this blog

March 31, 2021
Mark 14:1-11 /////////// At the House of the Leper Today’s text is the final story in the Gospel of Mark before the series of events begin starting with the Last Supper (tomorrow) leading to the crucifixion (Friday), then with Jesus in the tomb (Saturday) and risen on Easter morning (Sunday). It is interesting to me that Mark tells this story at this point because of what is about to happen. At the tail end of today’s text, we read about the betrayal of Judas Iscariot, which will swing a series of events into motion for the Son of Man to be lifted up. I still remember the first time that I put in my first pair of contacts. I was in the 8 th grade before my parents realized that I couldn’t see very well. I had no idea that I needed glasses! When everything is blurry, you begin to think that it is just normal to see that way. It wasn’t so blurry though that I couldn’t make out the writing on the chalkboard or anything, so I got by. That day that my dad took me to get my first eye exam
Read more 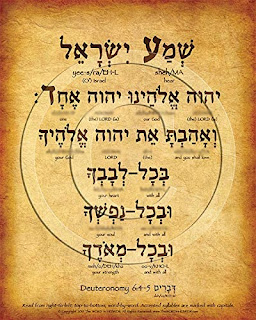 Mark 11:20-13:37 /////////// Shema There is a lot in the texts for today as we continue our journey with Jesus to the cross. Jesus has entered Jerusalem, the central hub of Jewish culture and worship on Sunday. Yesterday, we looked at Jesus cursing the fig tree and cleansing the temple, which I'm sure angered a lot of people. In today's reading, we have several instances of the religious leaders pushing back against Jesus's authority. Several different groups of leaders come to him several times and question him, trying to trap him in his words. They ask him about the authority that he acts under, they ask him about paying taxes, they ask him about resurrection, and they ask him about the Law of Moses. Jesus doesn't sugarcoat things- he tells a parable that explains how terrible the "chief priests, the teachers of the law, and the elders" have been. In 12:38-40, Jesus outwardly speaks against the religious leaders in the city. Finally, in chapter 13, Jesus be
Read more